Ambassador of Bolivia in the Kingdom of the Netherlands

Ambassador of Bolivia in the Kingdom of the Netherlands and Agent of the Plurinational State before the International Court of Justice in The Hague (December 2021-present). Member of the Permanent Court of Arbitration in The Hague. Permanent Representative of Bolivia to the Organization for the Prohibition of Chemical Weapons.

He is a former member of the Bolivian delegation to the ICJ for the case concerning Obligation to Negotiate Access to the Pacific Ocean (Bolivia v. Chile) and to several arbitral proceedings.

During his diplomatic career, he served  in the Ministry of Foreign Affairs as General Director for Bilateral Relations; General Director of Trade Negotiations; Deputy Director of Investment Promotion. Minister Counselor and Chargé d’Affaires at the Embassy of Bolivia in Austria, Hungary, Germany, Switzerland and the United Kingdom. Alternate and Permanent Representative of the Bolivian Missions to the United Nations Organizations; UNIDO, IAEA, IMO, UNODC, OPAC. Worked at the United Nations Drug Control Program and at the Secretariat of the International Narcotics Control Board in Vienna Austria as P4 Officer. Consultant for the European Union in cooperation programs in Bolivia. 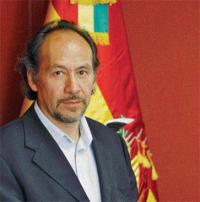